The Most Common Problems with Farm Irrigation Systems 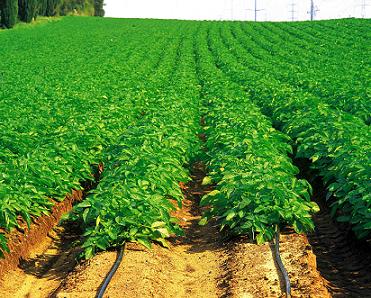 The two most common methods for dealing with these problems are ET based control systems and soil moisture based control systems. Evapotranspiration (ET) is the combined process through which soil moisture is lost directly to the atmosphere through evaporation and plants taking water out of the soil and transpiring it to the atmosphere. ET is typically a calculated value that takes into account factors such as recent rainfall, relative humidity, solar radiation, and a crop coefficient that accounts for the plant size and stage of growth. The calculated ET will give the grower an estimate as to how much water the soil is losing due to ET. Once he knows how much soil moisture he is losing he can determine how long he needs to irrigation to replace the lost soil moisture.

Occasionally ET based control systems are used with some type of soil moisture sensor such as a tensiometer to provide some feedback as to the accuracy of the ET calculations. Whichever method you use, ET or soil moisture based controls provide a much more consistent and reliable method of controlling your irrigation system than the “It looks kind of dry, so I guess I’ll water” method.