Foxtail barley is a widely distributed native cool season perennial or annual grass that is found throughout California up to an elevation of 9800 feet (3000 m). It is occasionally weedy on agricultural land and other disturbed, often moist places. Foxtail barley is susceptible to the same fungal pathogens that cause black stem rust of grains and wheat rust.

Ligules are membranous, and unlike hare barley, auricles are absent or are poorly developed.

The flowering head is a spike that ranges from 1-1/5 to 4 inches (3–10 cm) in length. Long needlelike awns, up to 1/3 of an inch (7 mm), extend from the spike, earning the plant some of its common names such as “skunktail” and squirreltail”. 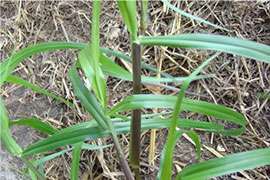